Spirituality is not a religion; it is a ‘Relationship’. You attain supremacy by not being a worldly man but a God’s man. We all know that a lie can travel halfway around the world while the truth is putting on its shoes.

In a society where people are engaged in their scrupulous activities to attain material wealth and where children are not at all bothered to look and figure out the harsh realities of life, there a lad of class 3rd of Akal Academy - Aalampreet Singh, teaches us that ‘a single lie can spoil the reputation of integrity and richness of the soul comes with the name of God.’

Aalampreet Singh, an inhabitant of village Ratia, is a child blessed with high moral values and admirable etiquettes. His views and way of thinking and his responsible character towards the society is really astounding at such a tender age and as uncommon as his name. His small article which says that- ‘A person should never lie’ is a masterpiece in itself. Though this saying is commonly known to us and there is nothing much fascinating about it but do we really implement it in our lives?

His story compels us to look towards the issues in the society and especially issues in every house. A drunkard young boy who is recklessly spoiling his life and career and a house full with quarrels over petty issues is really common these days. Today’s youth is a face of the rot within Punjab, signified by an aggressive drug and liquor culture which is fast corroding the very fabric of the state. The state of Punjab is in the grip of drug culture which is being seen as a personal problem and a social epidemic. The statistical reports show that 74% of the youth is addicted to drugs and 69% of rural households do not have a matriculate. They dropout from their education and indulge themselves into these activities or some of them are forcefully pushed into drug abuse.

Where an immediate action is required to save our youth from this menace, our government shows no will to undertake any action against the social issues and manipulation prevailing in the society. There are quite a few organizations that have taken up the task upon themselves to stem this rot. The Kalgidhar Trust, Baru Sahib has setup the country’s largest value-chain of 129 schools all in villages across five north Indian states.

But the tiny mind of a 3rd class lad with such bigger thoughts and his aspiration to have a true and alcohol free world fills us with wonder. In the age of picnics and video games, he proposes to tell us that ‘A LIE CANNOT LIVE’!!

His innocent thought that an ‘ARDAAS’ to Babaji can show wonders and end up all the hindrances and evils, mesmerizes us. Focusing on the spiritual values and following the sayings of Babaji, we can move out of this vicious circle and terror of drug addiction, unemployment and alcoholism. We can awaken our youth by having a great focus on value based education so our youth can set an example for the forthcoming generations and act as a guide and strength to the society.

Understanding the importance of the spiritual values and moral ethics is in itself a big thing. His desire of always speaking truth, his eternal being and his view of banishing alcoholism will lead him to a path of success and glory. Truth lies above falsehood as oil above water. Truth hurts but doesn’t kill and the lie pleases but it doesn’t heal. His zeal and valiant efforts which he has put in his masterpiece makes us aware that it is better to regulate your mind rather than regulating guns.

Therefore, let God guide you through the pathways of life as without belief there can be no successful outcome. Eyes are the window of the soul and if these small and innocent eyes can dream to shape the world then why not us. Life isn’t worth living unless you’re willing to take some big chances because for those who dream, there is no such word as impossible.

Programmed for the FUTURE - Parminder Singh makes it happen at HCL 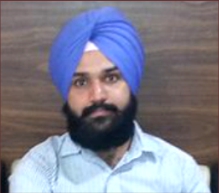 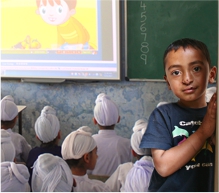 The Motivation to Live, Pray and Dream! 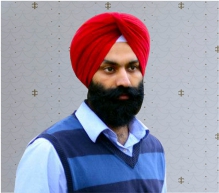